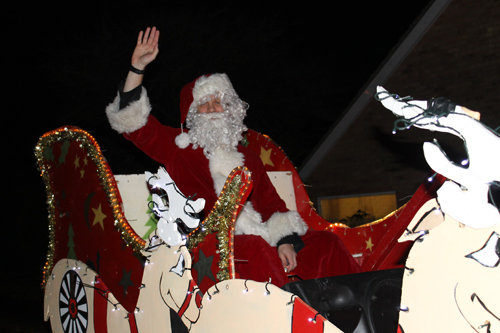 There’s many things that have been cancelled or gone virtual online this Christmas but Henley Lions are delighted to announce that Santa’s Sleigh is not one of them.

He will starting his sleigh ride next Monday (7 December) touring the streets of Henley for the all the children to see again this year.  His sleigh will be lit up, he’ll be ringing his bell and festive tunes will be playing so you’ll hear and see him coming.

Mrs Christmas as she is known (Pamela Philips) said, “This has been a year to remember for so many reasons….and they keep on coming. We were unable to plan this year’s Santa Sleigh until we knew the rules following 2 December. We won’t be knocking on people’s doors this year but hopefully Santa will play his Christmas music loud enough to let you know he has arrived.  Santa will do his best to wave at as many children, parents, grandparents and anyone else who waves at him.”

Santa will be accompanied by five elves who will have buckets for you to drop your donations into which go to local children’s charities and will have card machines for donations.  If you would prefer to donate online you can go to https://uk.virginmoneygiving.com/charity-web/charity/displayCharityCampaignPage.action?charityCampaignUrl=henleylions/santasleigh  The elves will also have a QR code link to this page each evening.

Santa will set off on his sleigh at 6pm each evening.  The days and routes are listed below:

Up St Mark’s Road
Over to Gainsborough Estate
Returning along Green Lane
Down St Andrews Road to Reading Road.

TUESDAY 15 DECEMBER
Hamilton Avenue to Vicarage Road including Singer’s Lane and Damer Gardens
Through to Peppard LaneWeaving through Western Road to Cromwell Road.
Up to Belle Vue,Berkshire and Manor Roads

Up Greys Road to roundabout including Albert Road, The Close, Greys Hill Church Street.
Up Deanfied Avenue to Ancastle Green

Award Winning Marketing at The Henley College
Scroll to top