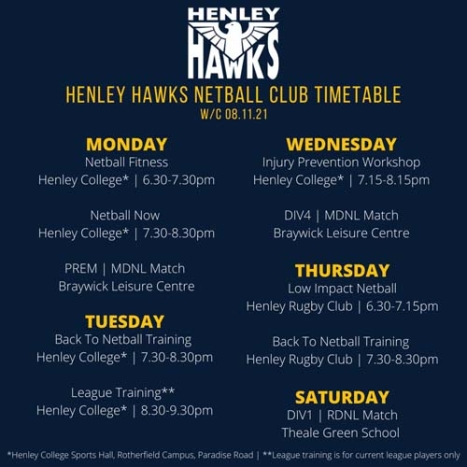 Have you ever wanted to play Netball? Are you looking for a fun way to get fit and meet new people? Or did you play Netball many moons ago and have no idea how you could ever play again?

Well, have you heard about the Henley Hawks Netball Team?

No matter your fitness, skill or ability there is a session you can join and play.

Details of session times and places are:

There are so many to choose from and even better your first session is free!

New players age 16+ always welcomed. So why not come along, have some fun and see what all the fuss is about. We’d love to meet you!

If you enjoy your first free session, there are options to become a member for £35 a month which includes all these sessions and much more. Alternatively, you can pay £7 as you go.

For more information regarding these sessions, membership and more please check out Henley Hawks Netball Club page on Facebook, Instagram or drop us an email: henleyhawksnetball@gmail.com.