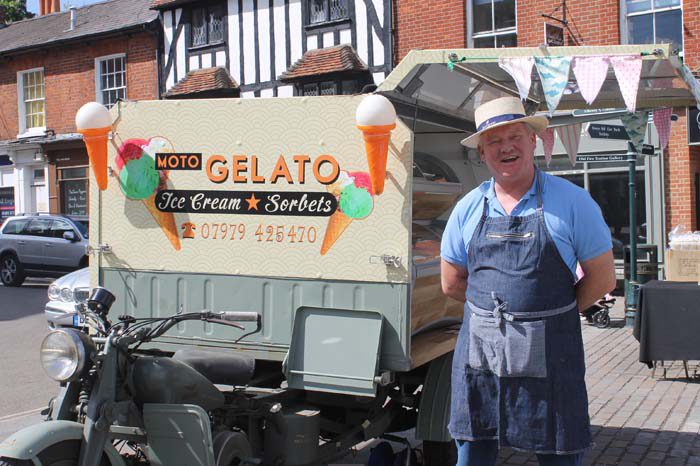 The sun is out… so that definitely calls for an ice cream or two?

Mike Rogers has been granted a new market licence by Henley Town Council to bring his Moto Gelato 1948 Moto Guzzi Ercole motorcycle trike which he’s converted the back of to sell ice-creams from. The ice cream trike will be at every Thursday Charter Market and the Saturday (2nd of the month) and Sunday (5th of the month) Farmer’s Markets throughout the year.

You might recognise Mike?  He’s also has been running the Stovell ‘s Fish Suppers van over the last 3 years which serves Shiplake and Nettlebed.

Mike bought the trike in 2016 from Italy and it took a year to convert.  Mike said, “I have designed the Moto Gelato to have a fun retro look and it was very well received at a number of events last year including the Regatta at Phyllis Court and the Trad Boat Festival.”

Mike serves Beechdean Ice Cream which is produced on a dairy farm at North Dean, near High Wycombe.  A single scoop costs £2.50 and flavours include salted caramel, mint choc chip, strawberry clotted cream, honeycomb chocolate swirl, pistachio, honey & ginger, vanilla plus mango and lemon sorbets.  He commented, “I’ve been to visit the farm and ice cream production facility which is brilliant and I’ve had so many compliments about how good the ice cream is already.”  We can certainly vouch for that as the honeycomb chocolate swirl sample we tasted was sublime.

Ice cream in the winter? Mike will be serving ice cream with a hot shot of chocolate and liqueur.

As well as the markets, Mike would love to bring his ice cream trike to your party, wedding, school or community event.  If you would like to book him call on 07979 425470 or email him on sales@motogelato.co.uk 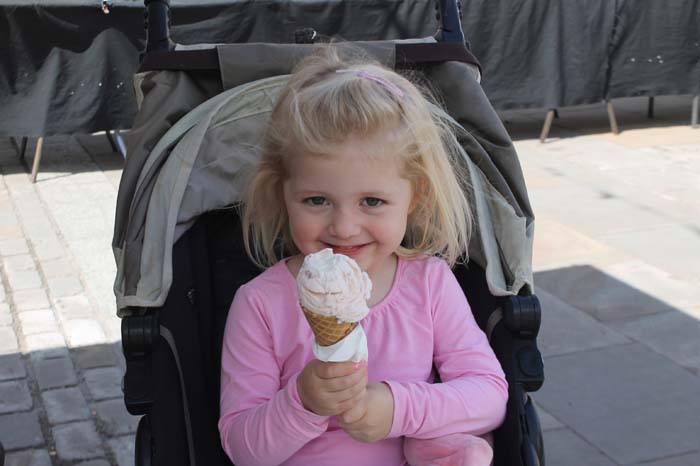