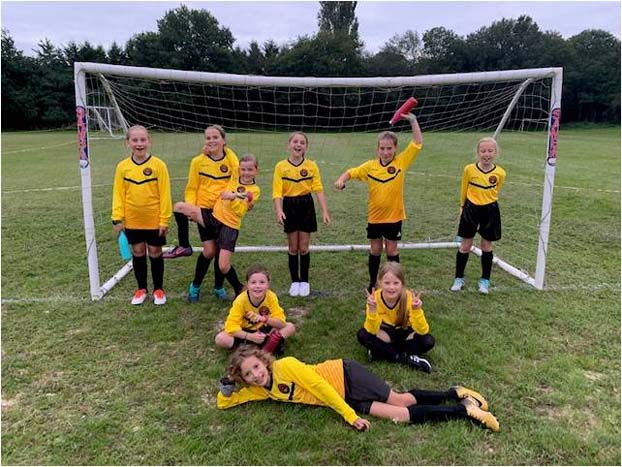 For the first time in the history of AFC Henley a girls only squad has been established, playing matches in the highly competitive Berkshire County Girls League.

The AFC Henley ‘Hunters’ Girls U10s contains girls between the ages of 8 and 10 who have been training at a girls only development centre on Friday evenings with AFC Henley in the Community coach Sam Bell. The squad was formed over the summer by parent volunteer coaches Jim Weatherston and Mike Turner, former professional footballer and age group manager for the AFC Henley mixed U14s.

Mike explained, “The squad have had 4 friendly games and played in their first ever league match on Saturday. Considering they have had no previous experience of playing football and have played against teams who have been playing for the past 2-3 years, they have done brilliantly. They are developing and improving very quickly but the main thing is they all play with a smile on their face and seem to be really enjoying it, which is just great to see.”

Jim said, ” The set-up allows for expansion. We already have a number of girls keen to play who we can’t fit into the current squad and we are hopeful that with a few more we can create another. Those who are interested can attend the Friday evening sessions with Sam Bell 5-6pm on the Astro turf opposite Tesco’s in Henley. That is the gateway towards playing as part of a squad.”